END_OF_DOCUMENT_TOKEN_TO_BE_REPLACED

Bruce Cassidy, in a league where coaches yell less and teach more, evolves to keep his message strong 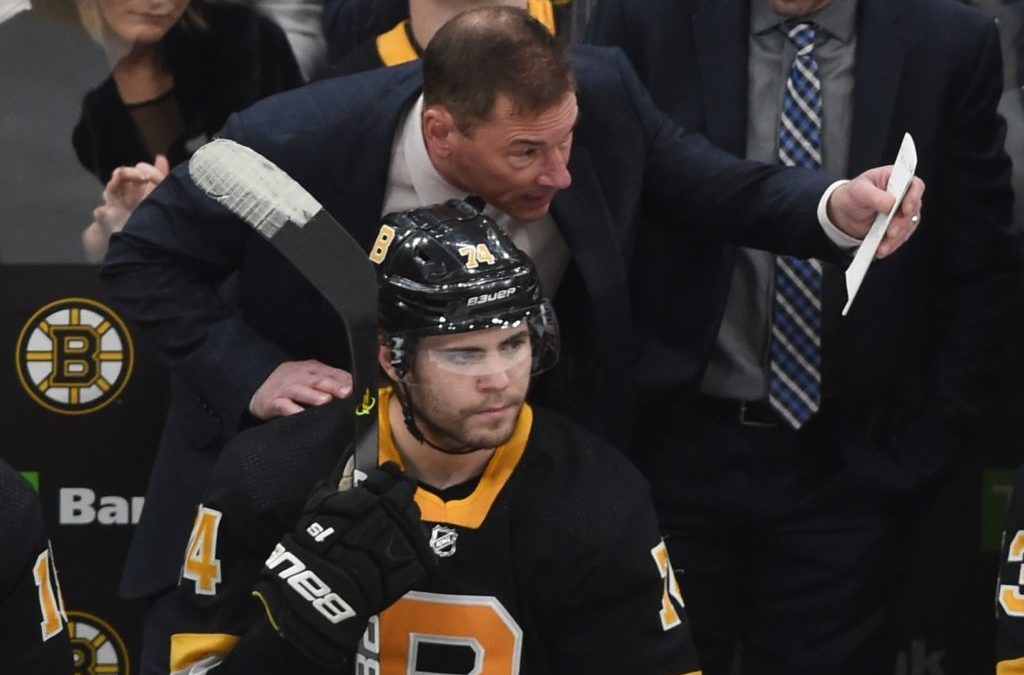 By Joe McDonald  (The Athletic)

It’s not a good sign when players stop responding to a coach.

If that happens, “It means I’m probably out the door,” Bruins coach Bruce Cassidy said recently.

Fortunately for Cassidy, his players are constantly heeding his advice. That was evident during Boston’s 3-2 win over the Buffalo Sabres on Sunday night. Cassidy hasn’t been thrilled with Jake DeBrusk’s effort of late, so the young winger was benched.

How did DeBrusk respond? With a pair of goals in an 18-second span. It’s not the first time, and it won’t be the last, that DeBrusk or any of his teammates not performing to expectations will sit and watch.

The benching got all the headlines after Sunday’s game, but there’s more to a coach’s motivational method than just sitting players. Each coach, or manager, has his or her own philosophy. Some of it is learned from mentors or other legendary coaches, while a bit of it comes from personal experience.

And any successful modern coach is probably updating and tweaking that philosophy annually, monthly, or even daily.

The NHL is undergoing a cultural change this season, sparked after Calgary head coach Bill Peters lost his job following allegations from former player Akim Aliu that he used racial slurs with him a decade ago. Coaches seemingly must now understand how to connect with the younger generation without relying on the hard-line tactics popular in past generations, or risk losing their job.

Cassidy has evolved over time, transforming his style to adapt to a new generation of players. Cassidy acknowledged he was probably harder on players in his younger days as a coach — though certainly not in a way that would garner negative headlines today.

“I didn’t hit anybody in the head, if that’s what you’re getting at,” Cassidy quipped.

As the coaching dynamic has changed, modern coaches have learned that yelling at players over and over doesn’t work. Being vocal in a positive manner and using video are tools coaches use in today’s game. If that doesn’t work, then eventually ice time is taken away.

“That’s the hammer you hold as a coach,” Cassidy said. “Every player wants to play, so how much ice time do you give him? Do you even put him in the lineup? You have to budget that wisely. If you go to the well too often, players after a while will wait you out. You hope that doesn’t happen, but that’s life sometimes; your message gets old and they’ll wait you out.”

In such cases, everyone loses. It doesn’t benefit the player, coach or, more importantly, the overall team.

When a coach does bench a player, he has to have a good understanding of how long that player should be out.

“You have to have an idea of how your player will respond. It’s not much good doing that and then the player goes sideways,” Cassidy said.

Part of that process is learning the players’ mentalities over time. Along with DeBrusk, Cassidy has sat Chris Wagner, Charlie Coyle, Joakim Nordstrom and David Backes. These players understand what is expected of them on a daily basis; if they’re not living up to those expectations, then their ice time will be limited.

“You hope they’re going to respond. They’re high-character guys and they (all) did respond,” Cassidy said.

Since teams have more coaches on staff in today’s game as opposed to when Cassidy first stood behind an NHL bench with the Washington Capitals almost 20 years ago, there are now more ways to buffer a head coach’s message. As Cassidy explained, the use of analytics and video help make a point — positive or negative. In the Bruins’ case, it also helps that the team has a strong leadership core.

“There’s a lot more information you can give the player to support your decision,” Cassidy said. “Back then, it was kind of, ‘My way or the highway.’”

Cassidy has learned the more direct and honest route with players is the best way to get his message across. Torey Krug is a seasoned veteran now, but he wasn’t always; dating back to his time playing under — and being benched by — Cassidy in Providence, Krug has always responded well to his coach’s criticism. In fact, Krug said being benched helped him improve his game.

“I wish it wasn’t the case,” he said with a laugh. “I wish it was un-effective. It makes you perk up and wonder if you can give a little bit more. It’s time to stop sulking, get back to work and put your head down and do whatever he’s asking of you. We’re very respectful of what our coaches say and do. Whenever we get a chance like that to redeem ourselves, most of us like to take the opportunity to do so.”

Krug has been on the receiving end of a benching at the NHL level, too. Case in point: The Bruins were playing the Capitals in December 2017 at Washington when Cassidy sat Krug for the final five minutes of regulation with the score tied at 3-3. He did not play in overtime, a situation where the puck-moving defenseman normally shines. The Capitals won 4-3, but the message was sent.

“He was really hard on me, for sure,” Krug said. “I don’t think he took it easy on me at any point in time, because he knew I responded right away.”

Krug certainly did, turning around after the benching to deliver one of his best performances of that season, notching two points in the next game against the Ottawa Senators. Even now, Cassidy hasn’t stopped sitting Krug when he believes the 28-year-old needs it.

“In terms of picking out certain guys, earlier in (this) season he sat me and he sat Charlie Coyle. So not only was that a message to myself and Charlie, but maybe a message to the younger guys to say, ‘Well, if he can sit them, he can sit anybody.’ We’re obviously important players to this team that play in all situations. He’s got to send a message one way or another and maybe younger guys perk up a little bit when they see that and understand they’re not invincible. It’s all just learning curves.”

It also helps when veteran players like Krug, Coyle, captain Zdeno Chara and alternate captain Patrice Bergeron buy into Cassidy’s methods and understand how much pride a player should have when he puts on that sweater.

“Coaches do their job to make sure we get the information before the games. Our job is to be ready and play. We have to respect there’s a certain game plan and each night we have to do our jobs,” said Chara. “Sometimes it gets away from us and we have to make sure when it’s time to play we’ve got to be ready. (Cassidy) does a hell of a job making sure we’ve got everybody going.”

Coaches can learn and grow in other ways, too. Cassidy has worked on when and how to get his message across in a subtle manner when it comes to disagreeing with league officials. He doesn’t exactly follow the approach of Columbus Blue Jackets coach John Tortorella, who launched a tirade against the league and its officiating after his team’s loss Sunday, lambasting the situation for 45 seconds at his postgame press conference before declaring he was not taking any questions and storming out.

Still, as one of the few who has truly been in Tortorella’s situation, Cassidy enjoyed the histrionics.

“Wasn’t that wonderful?” Cassidy said. “Did you guys enjoy that? It was inappropriate, but it was still entertaining.”

Cassidy hasn’t lost his temper to quite that degree — yet — but he understands that there are times he’s going to be unhappy, and that he has to find ways to manage that anger and seek a positive result.

“There’s a line you always bump up against and you figure it out the longer you’re in the league. (Tortorella) has been in the league a lot longer than I have,” said Cassidy, who acknowledged there have been times when Bruins general manager Don Sweeney has told the coach to temper his message, or just back off.

“I believe I tend to move on after. I got upset last year at certain times, and some of it’s gamesmanship as well. You’re trying to work a call without crossing that line. Other coaches maybe don’t go down that road at all. Some, like Torts, ‘Here it is and this is what I think, so live with it.’”

Fortunately for the Bruins, Cassidy’s philosophies and methods are effective. It should lead to another deep Stanley Cup playoff run one day soon.