He sees ’em when they’re shootin’, he knows how fast they skate… 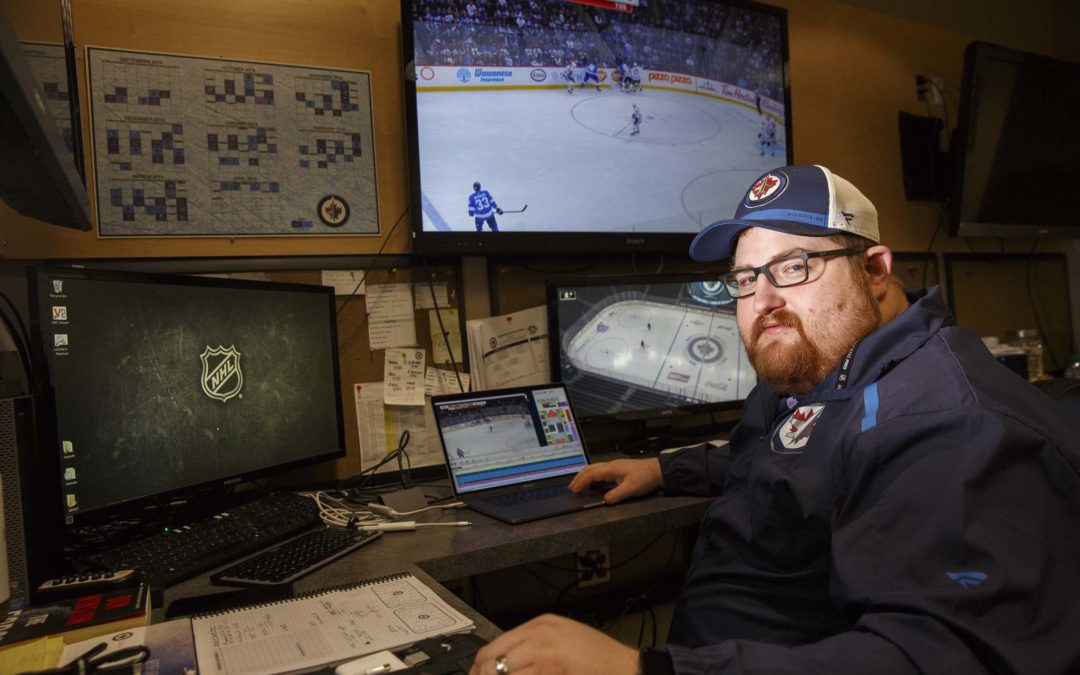 The video doesn’t lie, and that’s exactly how the Winnipeg Jets prefer it.

When it comes to video, Jets coaches, players and management are on board, although each uses the tool in different ways:

• Adam Lowry, still fuming as he gets to the bench after Winnipeg’s penalty killers get burned for a goal, grabs a towel and quickly wipes the sweat from his face and hands before picking up a tablet to watch a replay showing where things derailed.

• Ben Chiarot, who spins in the corner to avoid a stubborn forechecker, spots Nikolaj Ehlers darting through the defensive zone and sends a pass to the speedy winger. Hours later, the Jets blue-liner revisits the simple but effective play on his phone while relaxing on his couch at home.

• Paul Maurice is on a plane headed back to Winnipeg after a tough defeat to end a long road trip. It’s just 10 minutes after takeoff and the Jets head coach is already on his laptop, reviewing the night’s defensive-zone faceoffs.

The guy who spreads those valuable visuals around the organization — including an individualized highlight package emailed after each game to every player — is Matt Prefontaine, the Jets’ full-time video coach since the start of the 2014-15 season.

Prefontaine, 31, is rarely seen, because he’s bunkered down in front of monitors and computers in an office just outside the Jets locker room at Bell MTS Place.

But he’s at every game and travels on all road trips, poring over video — during games and after — that filters in from in-house crews, national broadcasters and the NHL itself.

It’s a sun-up to sundown kind of job, and he loves every minute of it.

“When you think about it in terms of there’s only 31 of us in the best league in the world, working in hockey at the highest level, it’s a pretty unique job. It’s a hard thing to quantify because it’s so special working in your hometown, working in the NHL,” Prefontaine says.

“It’s not a job for everyone. You have to like being totally immersed in hockey. The schedule is something else — the travel, games every two or three days — it’s a grind because there’s a lot of moving parts. But I don’t think there’s many better jobs in the world for someone like me.

“It’s the uniqueness of our work environment. Winning is great and feeling like you’re contributing to a team is amazing. Working in a team environment, going to a hockey rink every day is pretty cool.”

“When you think about it in terms of there’s only 31 of us in the best league in the world, working in hockey at the highest level, it’s a pretty unique job. It’s a hard thing to quantify because it’s so special working in your hometown, working in the NHL.”

Video analysis puts the focus squarely on the guys suiting up, allowing players the opportunity to review a situation immediately after they’ve just experienced it.

Lowry scrolls away on one of the iPads outfitted on the Winnipeg bench for immediate feedback after a shift. Chiarot, meanwhile, prefers to wait until he receives an email with attached clips from Prefontaine, usually about an hour after the final whistle. Maurice makes use of his time in the air.

“The road games I watch right after on the plane because it’s block of time that you don’t want to waste,” Maurice says.

“But home games I’m less likely to watch until morning, unless there’s something I really need to find out. I find the next day I’m not overly excited about a win or overly upset about a loss, and you really want to watch video from an objective point of view. If you don’t, you home in on mistakes if you’re in a negative mood and you don’t see a bigger theme.”

The 21-year NHL bench boss said when he broke in as an assistant coach with the Hartford Whalers during the 1995-96 season, he was charged with the responsibility of keeping track of video equipment and production.

Keep in mind, he said, this was old-school NHL, the days of three-hour video sessions when coaches would still push the pause button on particularly grotesque on-ice miscues, and the culprit had nowhere to hide.

“We had six VCRs and four TVs. That’s it. So, I had a part-time guy that came in, pressed record at the start of a game and then handed me copies at the end of the game. That was my video, the whole game from start to finish (with) nothing broken down,” he says. “It’s night and day now.

“It’s a huge job for us. Matt manages our information. We ask him questions and he brings back either video or analytics…. He edits the game while it’s happening so I have every piece you can imagine catalogued. Everything I want is broken down.”

When Prefontaine was hired by Maurice in the summer of 2014, his prime responsibility for the first few seasons was to prepare video of the Jets’ upcoming opponents. If the Minnesota Wild, for example, were set to visit, he’d have to cut “scouting” clips from a few of Minnesota’s previous games.

Those would be shared by Maurice and his staff — associate coach Jamie Kompon and assistant coaches Charlie Huddy, Todd Woodcroft and Wade Flaherty — and with players during team meetings, either the day before contests or on game-day mornings.

Lowry, who was ranked in the top-10 NHL faceoff specialists at 57.4 per cent late this week, (based on forwards with 200 or more draws), likes the pre-scouting aspect of video and is keen to analyze the technique of guys he’ll face at the dot.

“It really prepares you if you have a visual of what certain guys do, their tendencies. Then you can game plan on how you’ll combat those,” he says.

“Obviously, everyone has something they prefer to do in the circle, something they’ve find is their strength. If you see a guy is particularly strong at defending against that, it’s important that you have a backup plan if your (usual) setup isn’t going that night.”

The use of video has advanced dramatically. Coaches use it to understand and improve their teams’ performance in addition to previewing upcoming opponents.

Prefontaine and assistant James Cochrane use specialized software to mark situations — from faceoffs to defensive-zone coverage to puck retrieval to high-danger scoring chances for and against — for later review by the coaches and players.

“What we mark during the game is exactly what the coaches get. It’s a whole video file. There’s a time line at the bottom and there are many different things on that time line. A row might say ‘Goal for’ and if you click on that it goes to all those ‘Goal for’ spots. So, it’s a quick reference point if the coaches want to see specific things, like all special-teams video,” Prefontaine says.

“Right out of that same program I can one-button click, make an export and distribute it to all the players so they have all video of all their shifts, their special-teams work, goals for or against,” he says.

“These guys have a really good grasp of their game already and they know points where they want to go back and determine what happened during certain events. ‘What happened during this play?’ That’s how they’re using the video, they’re trying to get better.”

“These guys are the best in the world at what they do, and they have a high level of knowledge about the game and they want to self-evaluate. These guys have a really good grasp of their game already and they know points where they want to go back and determine what happened during certain events. ‘What happened during this play?’ That’s how they’re using the video, they’re trying to get better.”

Lowry, whose generation has grown up with tech and touchscreens, says he usually doesn’t wait for the end of a period or a TV time-out to review a play that’s been flagged by Prefontaine.

“I watch a lot of the game during the game,” he says. “We have the iPads on the bench, so we can watch our shifts after it happened. If I feel I’m struggling a little bit I’ll watch more. I can focus on certain things in my game and pick out why it doesn’t feel like it’s going the right way for me.

“I think it makes a difference. Some guys use it more than others but it’s nice to know you have that resource. ”

Chiarot said he lets the game sink in before he re-lives it.