END_OF_DOCUMENT_TOKEN_TO_BE_REPLACED

How do the Capitals know when to use a coach’s challenge? 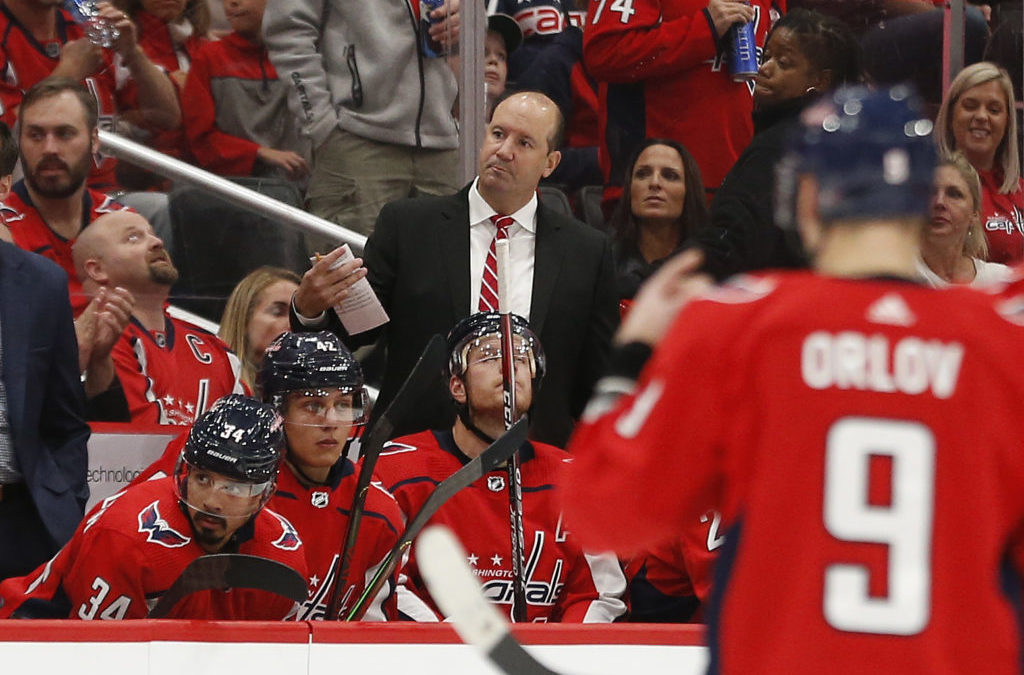 By Tarik El-Bashir (The Athletic)

ARLINGTON, Va. — Twice in the Capitals’ last three games, one of the most important plays of the night was made by neither a coach on the bench nor a player in the ice.

The play — successfully challenging a goal for offside — was made in a small coaches office outside of the dressing room. That’s where Brett Leonhardt and Tim Ohashi sit during games. They’re Washington’s video coaches, and they’re watching everything, including each time the opposing team carries the puck into the Caps’ zone, on multiple screens.

Was the entry onside? Was it offside?

Most times, the answer is immaterial. On occasion, though, it requires a quick decision that could swing a game’s momentum and, perhaps, alter the outcome.

Here’s how the Caps’ protocol for offside challenges typically works:

• Ohashi is in charge of tracking all entries. (Leonhardt, a former college goaltender and NHL Hockey Operations Department employee, is more focused on goalie interference penalties and pucks that may have been directed into the Caps’ net with a high stick.)

• If the opposing team scores and the entry was flagged as offside, Ohashi and Leonhardt confer. If they’re in agreement that the goal was scored on an offside play and there’s a likelihood that the officials will agree, Leonhardt tells assistant coach Blaine Forsythe, who’s wearing an earpiece on the bench. Meanwhile, Ohashi cues up the video for Reirden and his assistants to watch on the monitor that’s embedded in the floor. (Hence, the reason coaches sometimes appear to be staring at their shoes during stoppages.)

• Reirden and his assistants take a look, talk it over and then decide if they’re going to initiate a coaches’ challenge for offside. Although Reirden has final say, he trusts Leonhardt and Ohashi to be right.

The stakes are high because an unsuccessful challenge results in a two minute penalty for delay of game.

“Not only do you give up the goal but now you’re on the penalty kill,” Reirden said. “(Leonhardt and Ohashi) collaborate and pass on the message. Then we have to take the risk. It’s obviously on us – if it works or it doesn’t work.”

The Caps are a perfect 2-0 this season and 4-1 over the past three seasons on offside challenges, according to The Athletic’s Shayna Goldman. Since Reirden took the reins in 2018-19, they’re 3-1.

The overturned goals this month each came at a critical juncture in the game.

In Anaheim last Friday, Washington was in control of a heated game when the Ducks scored on the power play, cutting the Caps’ lead to 2-1. Or did they? Ohashi had already flagged the entry as offside; indeed, Cam Fowler’s front skate had crossed the blue line entirely and his trailing skate was in the air as Brendan Guhle carried the puck into the zone. What the officials missed, Ohashi quickly spotted. The Caps ended up hanging on for a 3-2 win.

The Bruins were leading 1-0 at Capital One Arena on Wednesday when Patrice Bergeron appeared to make it 2-0 after poking his own rebound past Braden Holtby. As Bergeron fist-bumped his teammates, though, the Caps were already debating the entry. Ohashi had flagged it as offside. Jake DeBrusk’s trailing skate was in the air as David Pastrnak carried the puck into the zone. No goal. The Caps ultimately rallied for a 3-2 victory in a highly-anticipated game between the NHL’s top two clubs.

Coach’s Challenge: BOS @ WSH – 15:35 of the First Period
Original call is overturned – No goal Boston
“I think it’s big,” John Carlson said. “(Leonhardt and Ohashi) are part of the team. There’s a lot on the line for them. It was obviously nice to not go down two goals there.”

“It’s huge, especially now with the penalty if you get it wrong,” he said. “I think it shows how good our guys are. They don’t get credit for what they do for us. They have a huge positive impact on us.”

In both instances, the play was offside by about the height of a skate blade. But those are the rules.

Nicklas Backstrom was in the coaches room in Anaheim, and witnessed Leonhardt and Ohashi at work.

“I got to see it behind the scenes,” said Backstrom, who was sidelined that night because of an injury. “They were freaking out a little bit, but they got the right call.”

Backstrom added: “I think that’s good for the game. What’s right should be right, you know?”

T.J. Oshie, Wednesday’s hero with a pair a goals, has also been in the coaches office while Leonhardt and Ohashi are scrambling to analyze an entry and relay the call to the bench.

“I spent some time in there when I’ve been out of the lineup,” Oshie said, “and to see what those guys do in there, it’s pretty amazing. It’s not a role where you get a lot of credit in the media, but those guys are really good at what they do. Obviously, it was two really big calls and momentum shifts in both games.”

Reirden similarly heaped praise on Leonhardt and Ohashi for the job that they do, adding that he and his staff not only evaluate their own performance on challenges but they’re constantly studying other teams’ challenges, too.

“We’ve developed a good protocol for it,” Reirden said. “We work at it, we talk about it, we watch challenges from other teams. It’s important and helps decide games. It’s become a major part of the National Hockey League now and it’s important as a coach to be on top of these things.”

Leonhardt and Ohashi declined to comment, preferring that Reirden speak on internal matters.