NHLCA Coaching Staff of the Month for December 2019

Each month we’ll give a shout out to one NHL team’s coaching staff for pulling out ahead of the pack. 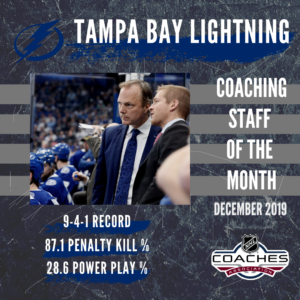 How’s the scoring work? We look at 5 categories for how teams are doing:

Then we take the top ten teams from each category that month and assign points based on how they finished in that respective category. Combine that with any subjective categories, like a really long winning streak, and we determine which coaching staff is most deserving of the title each month.